Since the mid 1990’s there has been a shift in guidelines and recommendations around exercise in pregnancy. Prior to this, it was only encouraged in women who had previously engaged in regular physical activity, with restrictions on how long and the intensity of the exercise. In 1994 the American College of Obstetricians and Gynaecologists (ACOG) released a position statement removing the restrictions around time spent exercising and heart rate, stating that women who have previously exercised can continue at a mild to moderate intensity. A large body of research on Gestational Diabetes in the 1990’s led to further changes in attitudes towards exercise during pregnancy, with current guidelines recommending 30min or more of moderate intensity exercise on most if not ALL days for ALL pregnant women in the absence of obstetric or medical conditions.

Guidelines for exercise during pregnancy
Many women are unsure if they should exercise during pregnancy, whether it be continuing previous exercise routines or starting to become more physically active if previously quite sedentary. Traditionally it was recommended only to continue with mild-moderate exercise if you had previously been active, keeping it to a maximum of 15min bouts without raising blood pressure over 140bpm and maintaining maternal core temperature below 38deg Celsius. However, in the past 2 decades there has been significant research into the benefits of exercise during pregnancy, yet there are still a lot of misguided recommendations both online and prescribed by health professionals.

The 2015 American College of Obstetricians and Gynaecologists position statement recommends the following:
• Physical activity in pregnancy has minimal risks and has been shown to benefit most women, although some modification to exercise routines may be necessary because of normal anatomic and physiologic changes and foetal requirements.
• Women with uncomplicated pregnancies should be encouraged to engage in aerobic and strength-conditioning exercises before, during, and after pregnancy.
• An exercise program that leads to an eventual goal of moderate-intensity exercise (equivalent to brisk walking) for at least 20-30min per day (150min per week) on most if not all days of the week should be developed.
• Moderate-intensity exercise should be measured by a perceived rating of exertion of between 13-14 (somewhat hard) on the 6-20 Borg scale. The “talk test” is another way to measure, where as long as you can carry on a conversation while exercising, you are unlikely to be over-exerting.
• A thorough clinical evaluation should be conducted before recommending an exercise program to ensure that a patient does not have a medical reason to avoid exercise.
• Obstetrician–gynaecologists and other obstetric care providers should carefully evaluate women with medical or obstetric complications before making recommendations on physical activity participation during pregnancy. Although frequently prescribed, bed rest is only rarely indicated and, in most cases, allowing movement should be considered.
• Regular physical activity during pregnancy improves or maintains physical fitness, helps with weight management, reduces the risk of gestational diabetes in obese women, and enhances psychologic well-being.

How exercise during pregnancy can reduce the risk of some conditions
Research shows that regular exercise is effective at reducing your risk of developing certain conditions during pregnancy, such as pre-eclampsia and gestational diabetes.

WHAT IS PRE-ECLAMPSIA?
Pre-Eclampsia affects 5-8% of women during their first pregnancy, usually developing in the second half of their pregnancy. It is diagnosed when there is persistent high blood pressure (>140/90) plus one or more of the following:
• Protein in the urine
• Persistent headaches
• Visual disturbances
• High level of swelling in hands and feet
• Epigastric pain
• Thrombocytopenia
• Elevated liver enzyme activity

A study by Sorensen et al (2003) concluded that regular moderate-intensity physical exercise in the first 20 weeks of pregnancy decreases the risk of Pre-Eclampsia (PE) by 24%, and regular vigorous physical activity decreases the risk of PE by 54%. Women who did regular vigorous exercise in the year prior to conception had a 60% decrease in PE risk.

GESTATIONAL DIABETES MELLITUS (GDM)
During pregnancy there is an increase in hormones, which will cause an increased insulin resistance in peripheral tissues (i.e. insulin isn’t as effective). This should be balanced with an increase in insulin release from the pancreas to maintain a balance of blood sugar levels.

The cause of gestational diabetes is a combination of two factors;
1. Higher than normal insulin resistance, due to high levels of pregnancy hormones, resulting in circulating insulin being inefficient. This is likely the primary factor in obese women who develop GDM.
2. Lower than normal insulin production, due to pancreatic dysfunction and pregnancy hormones, where there is insufficient insulin production. This is likely the primary factor in lean women who develop GDM.
In both cases, but especially the first instance, diet and exercise are important to help decrease insulin resistance and thus help control blood glucose levels. Exercise is also recognised as an effective way to prevent GDM if maintained through the entire pregnancy at least 3 times per week.
If a woman is diagnosed with gestational diabetes, this is usually a temporary form of diabetes mellitus that occurs in the late 2nd or 3rd trimester, when the placenta is making sufficient placental lactogen to increase the resistance to insulin. This will usually resolve after the birth with removal of the placenta and the body no longer producing the placental lactogen hormone.

Summary
• Guidelines for exercise have been updated and no longer stipulate restrictions on maternal heart-rate or avoiding exercise in the first trimester.
• All women should aim for 20-30min moderate-intensity exercise on most if not all days of the week (unless medically contra-indicated).
• Exercise such as walking, swimming, stationary cycling, and modified yoga, pilates and strength training are all safe to initiate during pregnancy or continue if previously doing.
• If you would like more specific information or guidance for an exercise program for you to do throughout your pregnancy, I would be happy to help.
Whether in person or via a telehealth appointment, please book online via our website, or feel free to contact our friendly front desk team on 9670 7041 or email info@flexpysio.com.au. 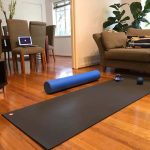 How to set up your space at home for TelehealthFlex Blog 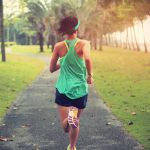